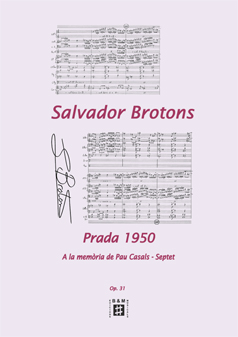 In this Septet for string quintet, clarinet and flute, I have tried to depict some of Casals feelings in 1950, as well as some of Prade’s great scenery beauty in the summer.

The first movement “Nostalgic Sorrow” tries to express the intense Casals’ sorrow for his self-imposed exile.  The quotation of “El Cant dels Ocells” (Casals most beloved Catalan folk song) is hinted at the beginning of the movement.  Under a cello ostinato, based on the five first pitches of the folk song, the violin introduces the main theme full of intensity.  After reaching the climax through a tensional gradation, the entire folk song is presented softly and distant.  The fusion of “El Cant dels Ocells” and the main theme is achieved at the end of the movement.

The second movement “Sant Miquel de Cuixà” depicts the spot of the Festival and its surroundings.  The movement is structured in five short parts (the Monastery, Summer wind, Canigó mountains, Sardana, Epilogue) linked without interruption.  It starts with a contemplative view of the monastery quoting a Casals’ theme from his sardana “Sant Martí del Canigó”.  It is a “quasi” plainchant melody with bells strokes in the background.  A timid warm wind blows and grows stronger progressively, like the Tramontana (North wind) leading our eyes to the Canigó mountains.  A beautiful Catalan melody (“Muntanyes regalades”) is presented by the strings while the flute and clarinet continue with windy figurations.  The music becomes more and more exalted culminating with a new melody, with happy and jumpy sardana rhythm (the Catalan national dance).  An Epilogue closes the movement in a textural and dynamic distention based on the plainchant-like melody on the low strings, blending with distant theme echoes extracted from all the movement parts.

The last movement “A Peace Song” expresses the ultimate Casals wishes:  Peace in the world (His name, Pau, in Catalan means “Peace”).  The movement starts with a turbulent sixteen-note sextuplet figure falling to a cluster chord in the strings.  A lament-like design is heard by a far away clarinet and flute.  Memories of war times, tragedies and catastrophes are not too distant, but little by little they fade away in the highest register.  From the very low strings, a mysterious ambiance is generated introducing one of Casals’ songs of peace from his “El Pessebre”:  Glory to God.  The song is harmonized tonally and starts very softly in the viola.  Later it grows progressively, mixed with the sixteen notes sextuplets war cell, to reach a majestic ending.  Love and peace overpower hate and war.