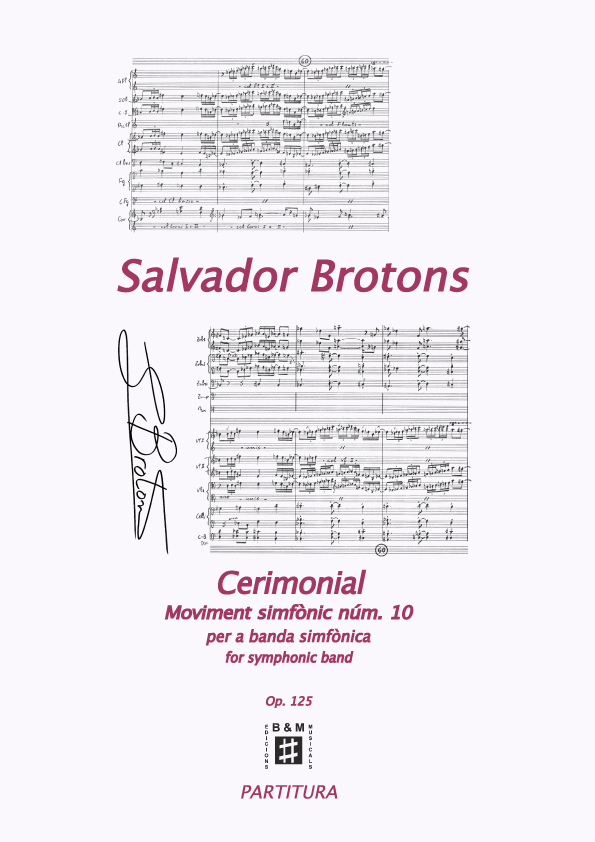 Commissioned by the Instituto Nacional de las Artes Escénicas y de la Música (National Institute of Performing Arts and Music) for the extraordinary concert to celebrate the anniversary of the National Library by the Orquesta Nacional of Spain, conducted by the author himself. The composer later made this version for the band.

Ceremonial was composed during the months of December 2011 and January 2012, commissioned by the Instituto Nacional de las Artes Escénicas y de la Música for the special concert by the Orquesta Nacional de España, conducted by the author, on the occasion of the celebration of the anniversary of the National Library. Later the composer did this version for symphonic band. This is a direct, short and dramatic work, with good instrumental color, and as its title suggests, of a certain ceremonial character. It follows a condensed sonata form scheme. The recapitulation is more a development than a repetition. The opening theme is fast and rhythmic, combining with brightness the various sections of the band, in which the percussion and brass sections predominate. The second theme, which is very lyrical, expansive and more intimate, is presented by the clarinets and then unfolds with the woodwind as it acquires more tension. After a curious development of scherzo character in 7/8, a Coda is prepared, based on the second theme in the brass section, of great virtuosity and brilliance.