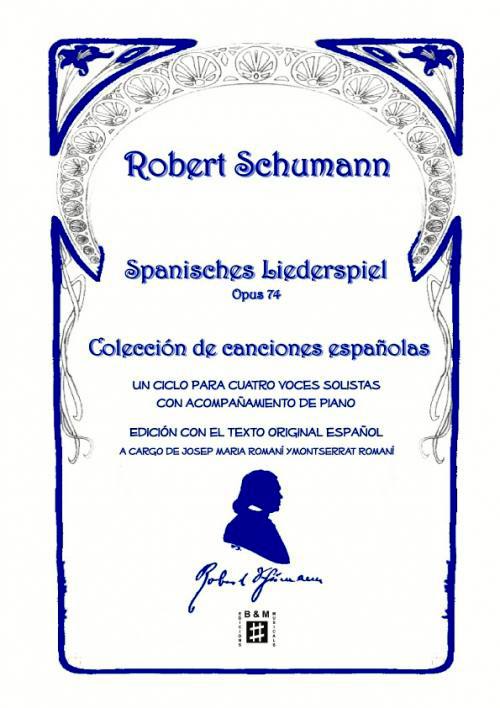 Score published for the first time with the original Spanish text, critical edition by Josep Maria Romaní and Montserrat Romaní. The text of Schumann’s version was translated into German.

Poems by various authors of the s. XV and XVI

Poems by various authors of the s. XV and XVI

Schumann never visited Spain, but he had a relationship with this language since in the years he studied Law in Heidelberg, he learned the Spanish language as well as other European languages.

As my colleague Seibold observes, several works by R. Schumann have Spanish titles and references, such as Romanzen und balladen, but the most Spanish are considered to be Opus 74 and 138, both written during his stay in Dresden; distanced in numbering due to printing dates.

It should be noted that Schumann uses the poems translated by Geibel but retains as the subtitle of each song the name of the poem from which it comes, in the original language, that is, in Spanish. This has served as a clue for his identification.

It is not my intention to enter into a polemic about the advisability or not of interpreting works of vocal music with the translated text, since there are respectable reasons in favor of it and against it. I just want to remind you that Robert Schumann himself has on occasion already been in favor of translating his works, as is the case of Das Paradies und die Peri. Oratorio Op. 50, premiered in England translated into the English language.

Our modest option represents an alternative that, without being the only one, we believe is valid and can be useful in certain contexts.

This option goes beyond the simple translation… or perhaps, it goes further back, in the sense of returning to the original sources since, for the formulation of the text in old Spanish adapted to music, Spanish poems have been prioritized above those that the poet Geibel translated into German. In any case, the absolute priority has been a rigorous fidelity to the musical score, including the aspects of phrasing and accentuation. These eventually force compromise solutions to be adopted and limitations to be assumed when defining a definitive text, as close as possible to the Castilian language of the High Middle Ages.

Disclosure was already an objective pointed out by Schumann himself: In a circle of friends he referred as follows: “I think that perhaps these will be the songs of mine that will have the greatest dissemination” Fragment of a letter to his publisher, Kistner (04/22/ 1849)

At the moment, this wish/prognosis has not come true. We hope that our work contributes to making it a reality. Robert Schumann well deserves it. And also the prestige of the Spanish language and literature.