Skip to main content
Close Search
View cart “Hallelujah from Messiah” has been added to your cart. 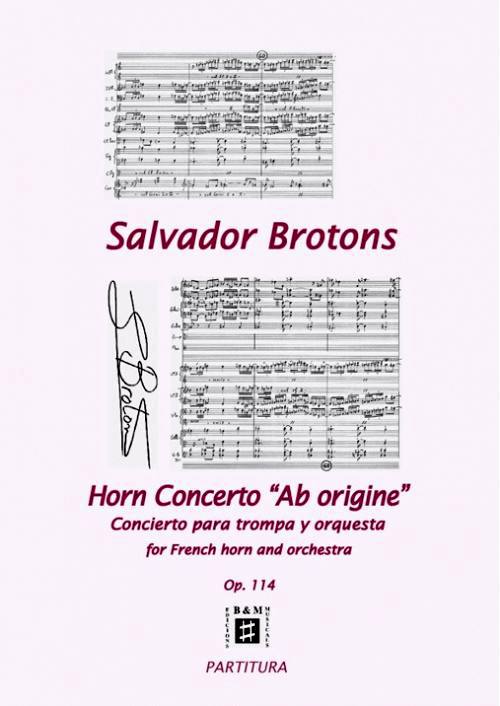 Concerto for horn and orchestra that includes horns such as sea snail, alpine horn and natural horn. But this concert can also be performed, without difficulty, entirely with the modern (cromatic) French horn.

The concerto for French horn and orchestra was written between the months of March and July of 2009, by petition of the virtuoso French horn player Javier Bonet and by commission of the ONE (Orquesta Nacional de España). Like in my previous concertos for trombone and trumpet, writing a concerto for a brass instrument allows the orchestra to acquire a special brightness and a prominent role. Due to the potency and sonority of the soloist, the orchestra can accompany the solo instrument, or even compete with it. This is why the concerto has a big orchestration, rich in timbres and often spectacular.

Given Javier Bonet’s fascination for the natural horn, and taking into consideration that the horn is one of the most primitive instruments in concept, I have given the piece a historic flavour. Ab origine (From the origins) evokes the first instruments (the sea snail, the alpine horn and the natural horn) and highlights the expressive possibilities of the instrument in its simplest and purest conception, playing with the natural sounds.

The piece is conceived in three movements. The first gives the subtitle to the entire piece. Evoking nature, the soloist begins with the sea snail, under a subtle percussion accompaniment in the background. He then moves on to the Alpine horn hinting at the main theme beneath an ambience of soft harmonics in the upper strings. At the beginning of the Allegro, he changes to the natural horn and presents the principal theme in its entirety. The next thematic material is presented with the chromatic horn (the contemporary horn), but the movement ends by returning, in mirror fashion, to the origins (natural horn – alpine horn – snail). Chamber music textures predominate throughout the whole movement although there are several passages of strongly bright sonority.

The Ciaccona is of a slow and expressive character. It is entirely based on five descending notes in the bass in a variation form. The French horn presents the lyric and long principal theme. After a space of tension, the principal theme passes to the oboe, which dialogues with a countermelody in the lower register of the French horn.

The Cadenza of the soloist provides a bridge between the Ciaccona and the Giga. It is conceived to be played with the natural horn with multiple modern touches of the left hand. The Cadenza takes the quiet and magical ambience of the end of the Ciaccona, and progressively acquires the cheerful and bright tempo of the Giga.

Exuberant, joyful, rhythmic and at the same time very melodic, the Giga ends the concerto with a note of optimism and strength. The two main themes (the first rhythmic and the second very lyric) are often combined in a particularly euphoric orchestration.

This concerto can also be performed, without problems, with the modern horn (chromatic). It is only necessary to transpose to F the brief passages of the Hora gai in A, and those of the Alpine horn in Eb. The music for the natural horn should be played with the chromatic horn, always using modern intonation.