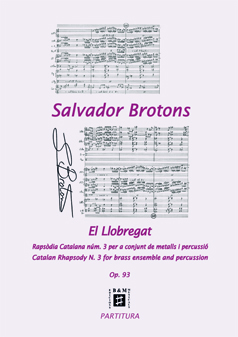 Written during the months of October and November of 2003. The Llobregat is a Catalan rhapsody originally written for cobla and percussion. Later I made this version for brass ensemble.

It is not at all about a programmatic work in the way of Smetana’s Vltava (Moldau). The title of the work aims at the flow followed by the Llobregat river, which is born thin and with little flow, and dies majestic and full in its arrival in the sea.

In this entire excursion, the music starts simple and monodic, and in its course, the river passes for majestic moments, other more restless and also other being more calmed, but always with an unstoppable and fluid rhythmic internal movement.

At the structural level, the work offers three thematic kernels presented and developed immediately in a rhapsodical way. The first theme is basically lyrical and contrapuntístic, the second one rhythmic and frantic dominated by the timpani and an insistent rhythm, and the last one based on the Catalan popular song El Comte Arnau.

This song is brought up in a progressive upward gradation that, starting very soft and low tension, keeps on repeating adding new counterpoint to it and acquiring a dynamic deployment of great brightness. After a modified re-exposition and a very changed second theme, the work closes in the brightness of the popular melody inserted of elements of the first theme.