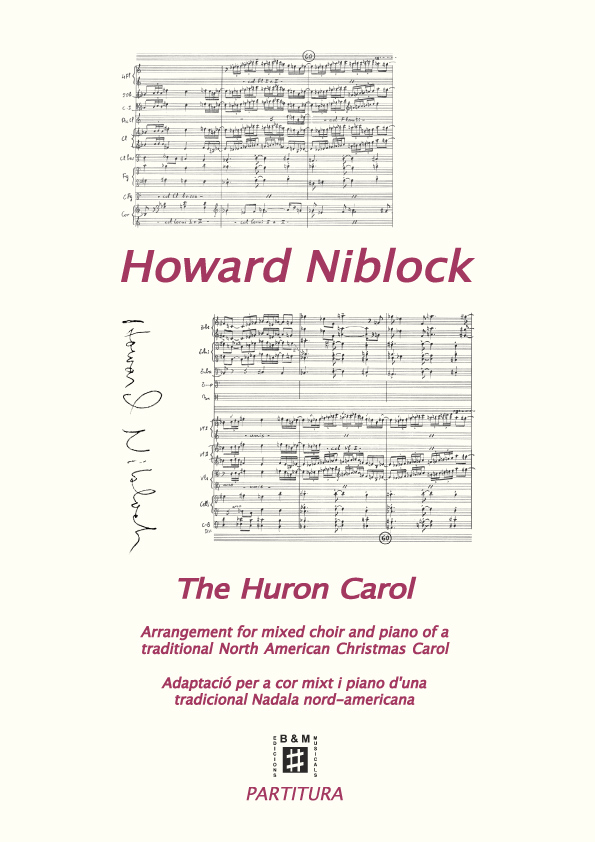 Arrangement for mixed choir and piano of a traditional North American Christmas carol.

“The Huron Carol,” possibly the earliest Christmas carol to originate in North America, has an extremely complex and fascinating history. Jean de Brébeuf, a Jesuit missionary who worked with and among the native Huron tribe in Canada during the early 17th century, created the song in the Huron language. The piece is occasionally known as “Jesous Ahatonhia” (Jesus is born), which was apparently the original title in Huron. The now-familiar English text dates from the 1920s: Jesse Edgar Middleton, a reporter for the Montreal Herald, wrote a very free “translation” of a French version (which itself differed from the original). Middleton’s English lyrics contain a curious and unsettling mixture of references, with God as the “mighty Gitchi Manitou” (actually the Algonquin and not the Huron name for God) and the Magi as “chiefs” whose gifts for the baby Jesus are fox and beaver pelts. The words are an especially beautiful fit for the melody, but I can well understand why many native North Americans find them patronizing and inappropriate. Speaking of the melody, it was taken from a French chanson (“Une Jeune Pucelle”) that was already at least a century old in the early 1600s. The carol consequently exhibits the strict Ballade form (aab+refrain), a form that was especially common for a French chanson in the Medieval period. As you can see, this carol exhibits multiple influences from Native North American, French, and Canadian cultures spread over more than 500 years of history!

My arrangement attempts in several ways to reflect the tensions, mixtures, and ambiguities inherent in the piece and its history.