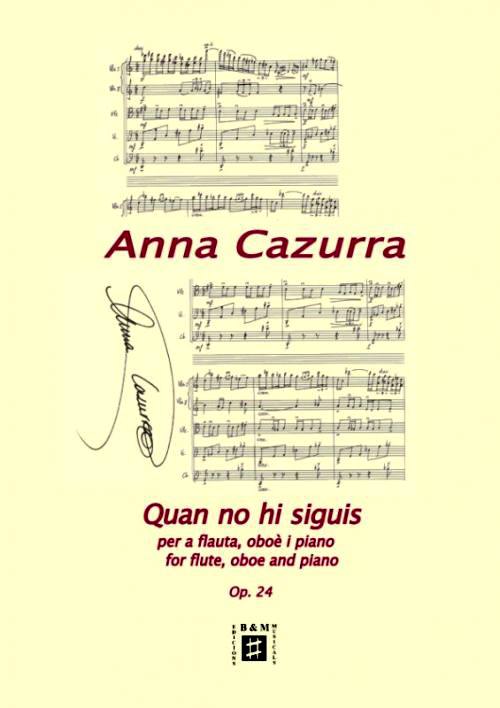 Quan no hi siguis (When you are not here)

Quan no hi siguis is inspired by a brief poem written by my friend Eugeni Velasco one afternoon in the month of February 2008.

Written in a single movement, the work presents a tripartite structure. It begins with a theme of lyrical character which transmits the nostalgic feeling of the poem. The flute and the oboe converse without confrontation while the piano clothes the dialogue with discreetly sensual and enveloping harmonies. A second theme enters (bar 65) which is more animated with a more marked rhythm but this is not developed and links in to with the central section of the piece (bar 102). Here a duet between the flute and the oboe begins with a very emotional theme that leads quickly toward a sad waltz, with touches of rhythms from the Latin American tradition. The third section is a decorated and varied re-exposition of the two themes of the first section which gradually intensifies the emotional weight of the poem on which it is based.
Quan no hi siguis is a work that requires a timbric equilibrium amongst the three instruments which interweave an essentially contrapuntal texture. The piano plays the double function of accompaniment and of third solo instrument, heavily loaded with internal melodies. The work requires a good interaction between the instrumentalists as they fluctuate between functions of melody and accompaniment. It is also important to pay particular attention to the expression of the character of the themes and the subtleties of timbres and dynamics throughout the work.