Skip to main content
Close Search
View cart “Turkish March from “Ruins of Athens” (Marcia alla turca)” has been added to your cart. 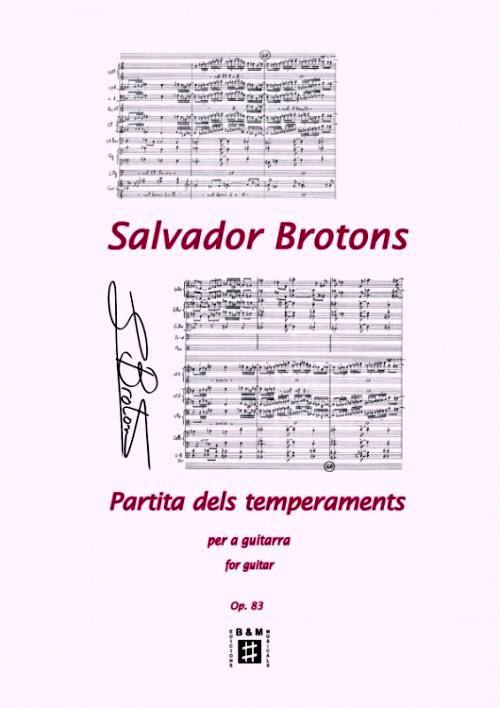 Digital files will be sent in PDF format once the payment has been verified.
The score will bear the watermark as an authorized copy.

The Partita dels temperaments was composed fluently during the month of January 2001, commissioned by the prestigious guitarist Gabriel Estarellas and the Centro para la Difusión de la Música Contemporánea.

Once more, I have found inspiration in the Greeks. In this case in Hipocrates’  Typology of the Four Humors or Temperaments. Hindemith, Nielsen and other composers have written on the same subject in different genres. In this work I have only wanted to briefly describe the four personality types.

The Sanguini is an impulsive temperament but also kind, sociable, confident and outgoing. The music offers variety and contrast. After a slow introduction, a developed and happy Allegro with some reminiscences of tarantella and dance music follows.

The Phlegmatic is calm, unchanging, controlled and persistent. It is usually of reasoned principles and deeply meditated. The scordatura of the fifth string in A flat gives the slow movement a certain heavy air. A gradual crescendo dominates the central part reaching a culminating space tens. The stubbornness of the beginning returns to close the movement.

The Melancholy is the most desperate and anxious temperament. The sweet melody in the high register is evocative and raised with rubato tempo. The central part is more dramatic and intense to return to the initial melancholy.

The Choleric is the brutal, exalted, active movement, of insistent rhythm of great vitality. The tempo without any change of unit is maintained until the end in a demonstration of strength and determination.