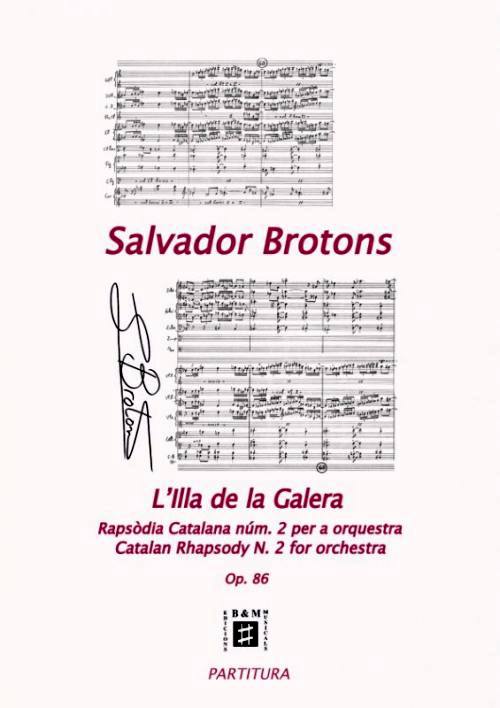 Work commissioned by the Fundació Orfeó Català/Palau de la Música Catalana. The piece is a small symphonic poem, 13 minutes long, with a Catalan and Mediterranean flavour, inspired on the Illa de la Galera, The Galera Island is a paradisiacal place off the Cape Creus (Costa Brava).

Originally written for cobla, the piece was composed from December 22nd, 2001 to January 6th, 2002, having been commissioned by the Fundació Orfeó Català/Palau de la Música Catalana.
The Galera Island is a paradisiacal place off the Cape Creus, in the Northeast of the Iberian Peninsula. It is only accessible by boat since the winter winds often blow very strongly. It is called Galera Island because it is located in front of the beach that bears the same name, and it is an ideal place to relax and take the sun.
The piece is a small symphonic poem, 13 minutes long, with a Catalan and Mediterranean flavour. We are brought nearer the island by a fast opening section. Once on the island (a majestic and bright principal theme), one can relax fishing and enjoying the purest air. In its development, one can hear echoes of the sardana (a popular Catalan dance) and other music with bright happy rhythms. The music begins to relax into a calmer and evocative central part fully based on the poetic popular song La calma de la mar (The calm of the sea). In this intimate section, as its lyrics suggest, we are transported to childhood memories and a yearning for an irrecoverable past. After a slightly modified re-exposition of the first section, we are brought to a euphoric and brilliant ending where the popular song is combined with the majestic principal theme.