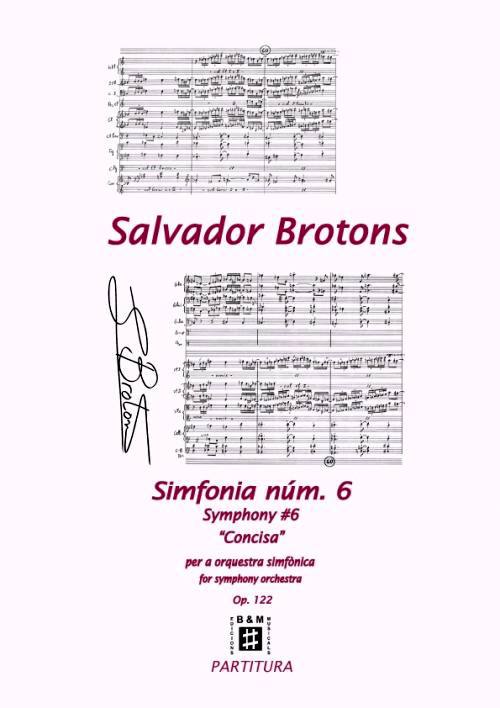 Symphony No. 6 “Concise” was written during the summer of 2011 for the Symphonic Band Lira Castellonera of Villanueva de Castellón (Valencia) and its director Jose Tello, to be presented as a free-choice work in the 2012 Bands Contest in Valencia. I conceived this symphony for the sonority of a large wind orchestra and percussion although I also wrote an adaptation for symphonic orchestra.
This sixth symphony is considerably shorter and does not follow an established external program. It is characterized as pure music. It has five direct movements, without much development or thematic manipulation, hence the subtitle of “Concise”. The movements are the following:

Frontal, as the title suggests, is a fast movement of direct impact. A modified sonata form follows, with a spirited and energetic first theme while the second one, presented by the oboe, is lyrical and intimate. Courtship (Procession) has a ceremonial character. The main theme is presented by the euphonium, over a march rhythm. Various relaxed solo interventions follow, after which a space of high tension leads to the restatement of the main theme brilliantly orchestrated. A process of relaxation closes the movement as it disintegrates. The Scherzo is short, colorful and very fast, with irregular and continuous metre changes. The rhythmic passages alternate with others of very lyrical character, along with instrumental virtuosity, give the movement great vivacity and contrast. A set of 10 notes, already presented in the Scherzo, serves as an ostinato theme of the Passacaglia. Of great dramatic development, the Passacaglia starts mysteriously in the lower register and gradually, following a complex counterpoint process, expands to reach an explosive ff which links to the Finale. Lively and dynamic, the last movement has the directness of the first. Two main themes dominate the movement, the first rhythmic and determined and very expansive, and the second lyrical. Short references to themes of the first and second movements appear in the short central part to prepare a shortened recapitulation and a brilliant Coda briefly recalling the Passacaglia.