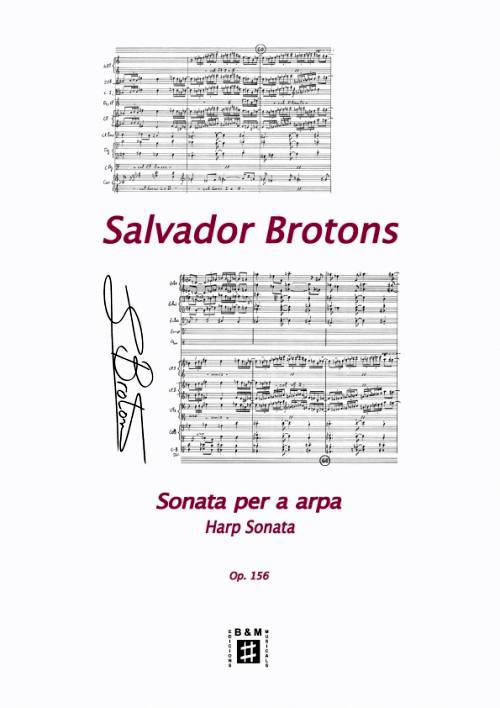 Sonata per a arpa (Harp Sonata)

I have always been thinking to write a Harp Sonata but never found the time to do it. After listening Cristina Montes’ superb interpretation of my early harp piece Subtlety (Subtilesa), I got motivated to write this new sonata.

As a composer, it is always a challenge to write for harp. It is a very beautiful instrument, but my usual very chromatic style goes often against the harp idiomatic writing. As always, I have tried to feature the fabulous poetic possibilities of the instrument as well as the numerous sound effects the harp allows.

Written in July 2020, during the Covid -19 forced professional activity break, the Sonata is conceived in three movements.

The first movement is written in a non-tonal Sonata form. The initial theme is full of vitality in a continuous binary and ternary meter change. The expressive second idea is planned in a slower tempo and more stable rhythmic activity. A development section follows, manipulating the presented material. It starts mysteriously soft, and grows little by little to a culminating point leading to the Recapitulation. Shorter and modified from the Exposition, the music will build excitement towards a brilliant ending.

The second movement brings a peaceful break featuring the harp charms. It has four different parts: The first is very singable in a neoromantic tradition, the second plays with the soft and subtle combination of glissandi and harmonic sounds, the next part is a growing crescendo moving ahead the tempo to reach back to the first romantic theme in a loud dynamic. A distension Coda ends the movement fading away.

The last movement is a colourful fast one. It starts with an introduction, which also will later serve as a postlude, starting in the high register moving to the lower. Two main themes are presented always in 3/4 meter. The first one features the characteristic pedal glissando, and the second one introduces a singable rather chromatic melody in a little more relaxed tempo. After a short development section, the two themes come back in a compressed manner. An epilogue follows, based on the introduction in a reverse way bringing the music from the low register to the highest, ending the Sonata brightly.