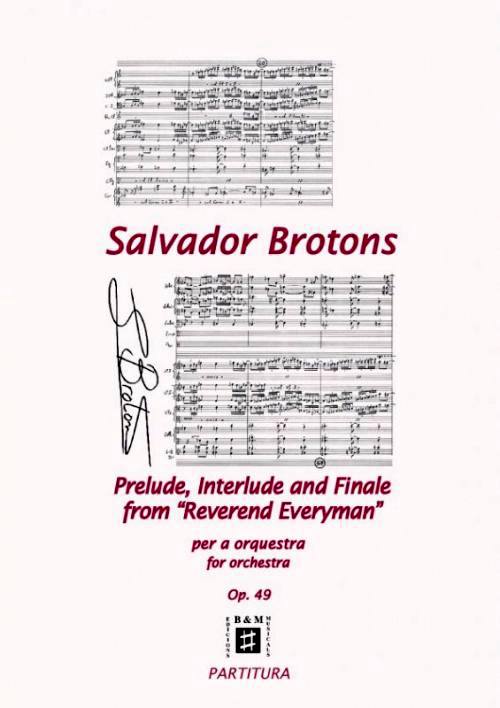 After the premiere of the opera, and in order to give more dissemination to the piece, the composer combined the Prelude, Interlude and Finale, which synthesize the content of the opera, without interruption, in a kind of symphonic poem.

Written in 1989 by commission of the Florida State University, the opera in two acts Reverend Everyman is one of the most ambitious and dramatic works of the composer. Although it was conceived for television, the opera was premiered in a theatre in Tallahassee, and later in Portland (Oregon) gaining great success in audience and reviews.
The medieval story of Jederman, a famous man who confronts death with terror, is brought up to date in the contemporary America through atelevangelist who is punished to death for his irregular behaviour. The glorious Reverend, with his popularity, grieves before death after asking unsuccessfully for help to all his friends, relatives, and followers. Death does not have friends and scares everybody. All fortunes and ambitions in the world are reduced to nothing in front of this inevitable end.
After the premiere of the opera, and in order to give more dissemination to the piece, the composer combined the Prelude, Interlude and Finale, which synthesize the content of the opera, without interruption, in a kind of symphonic poem.
In the Prelude, the terrifying image of Death appears, represented by the contrabassoon and trombones, in front of the grandiosity of the powerful man. Later, his humble wife’s theme of love appears which acquires an agitated development. The Prelude concludes with a new appearance of Death.
The Interlude is a musical space of great impact between scenes 1 and 2 of Act 2, just after the Reverend is confronted face to face for the last time with Death. The rhythmic insistence is omnipresent and the music is highly energetic, exuberant and dramatic.
In the Finale, the exhausted image of a desolated and repentant man imploring for help is illustrated. Over a lamenting ostinato of the cellos, past fleeting images appear like flashbacks which torment the defeated hero. A sensation of loneliness, powerlessness, and strangeness situate the lonely man on an empty stage waiting for the black maiden of Death to carry him away.