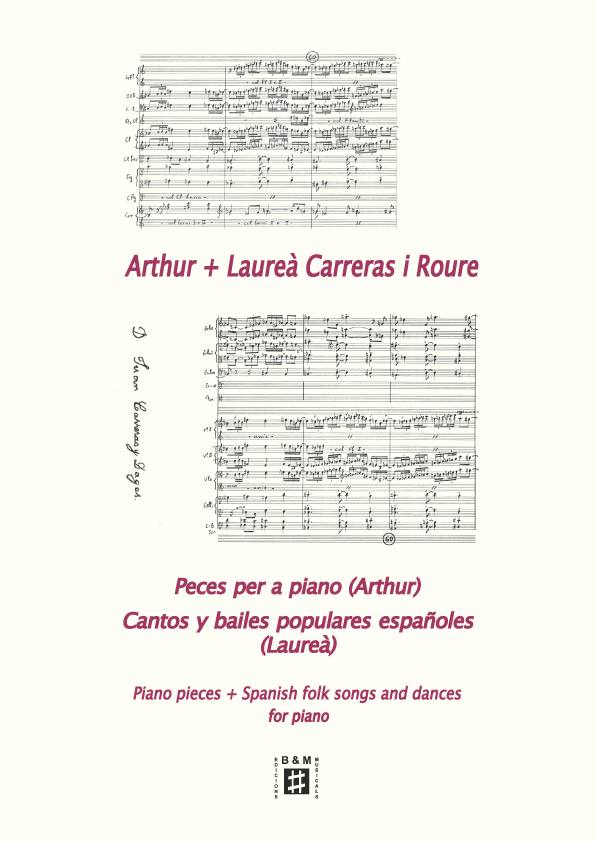 Piano pieces by Arthur and Laureà Carreras i Roure, sons of the famous Girona composer Joan Carreras i Dagas. Laureà (Girona, 1848 – Manila, Philippines, 1887) was his father’s assistant at the School for the Blind in Barcelona and introduced advantageous modifications to the Braille system to teach music to blind people. Then due to opposition, he was appointed chief musician of regiment nº. 4 of the garrison in Manila, the town where he died much too young.

Pieces for piano by Arthur Carreras i Roure

A work with simple pretensions, basically for entertainment, it is a habanera that had to be performed in places with relaxed atmospheres. It was published by the French publisher Th. Jouve, at 14 rue de l’Odéon. A handwritten annotation on the original copy mentions Brother Joan de Déu, who was also a musician but eventually became more inclined to teach French as a means of learning. life.

It is a work without many pretensions, cheerful, fun and with the desire to please and entertain the public for which the author had to play. It was published by the publishers Lemoine et fils, at 17 rue Pigalle in Paris.

Mazurka also published by Th. Jouve de Paris. This work seems to be created to dance or accompany a dinner or evening in a restaurant.

This piece, dedicated to Princess Frederica of Hannover, and also edited by Th. Jouve, is completely different from the other three works, and shows us a virtuoso Arthur Carreras and consummate pianist. It is a theme and variations, preceded by an introduction in slow tempo. The first variation is in the form of a tremolo, a resource that his father also used. The second is based on devilish arpeggios in the right hand, which require excellent technique, while the left hand plays the theme. The third and final variation takes the form of an arpeggio ostinato with the melody in the upper voice. It is a work of high technical demand and evidence of the excellent musical training that our author treasured.

Laureà Carreras i Roure (Girona, 1848 – Manila, 1887) was one of the sons of Joan Carreras i Dagas who helped his father in the task of teaching music and other subjects to blind students who attended the School for the Blind, founded by the patriarch of the family in Barcelona. According to the bibliography, he significantly helped to improve the Braille system for reading music, even receiving an award at the Catalan general exhibition of 1871. He won the position of musician in one of the Spanish regiments stationed in the Philippines, where he would die in 1887.

He composed several works, among which various media of the time highlight his “Spanish popular songs and dances.” Conceived as twelve compositions for solo piano, with a markedly popular and folkloric tone, we can say that they are framed within the current of musical nationalism of the second half of the 19th century, although without reaching the importance of the works of Felip Pedrell, Joaquim Malats or Isaac Albéniz, whom we do not know if Carreras i Roure got to know. However, it is remarkable that this work, published by the Vidal i Roger Editors in Barcelona, ​​and which we cannot date exactly ―although it was very probably composed and published before he left for the Philippines― is a modest precursor of the great works for solo piano by Albéniz, inspired by popular Spanish songs, such as “Iberia” or “España”.

The work that we originally presented was structured in twelve short pieces, of which only ten have been preserved. Each one is associated with a certain Spanish region or nation, and although at that time the Andalusian element was the predominant one with regard to the Spanish artistic imaginary, our author offers a more extensive and less restricted look, and thus dedicates four pieces to the music typical of Catalonia ―of which only the first, second and fourth have been preserved―, one from Aragon, one from Galicia, one from the Basque Country and four from Andalusia, of which one is dedicated especially to the region of Malaga.

The ten pieces that we publish are not works of great piano virtuosity, but they do capture, with a deceptive simplicity, the spirit of the different places and the different dances and songs to which the titles of the pieces refer. Thus, those inspired by Catalonia, which are entitled “Ball de rams”, “Ball de Sant Joan” and “Sardana”, imitate the rhythmic precision and austerity of the religious celebrations and popular dances on which they are inspired, with simple but effective reasons. The piece dedicated to Aragón, “Jota”, recalls the mentioned composition in many moments. As for the Galician work, “Gallegada”, with almost impressionist harmonies, it is a piece that moves away from traditional Galician music, perhaps to try to capture the misty and mystical atmosphere of this land. The Basque “Zortzico” is a piece of an almost epic, heroic character and with a marked rhythm and resounding harmony. The four pieces related to Andalusia are probably the most difficult to execute on a technical level. The “Fandango”, the “Caña”, the “Bolero” and, especially, the “Malagueña” imitate the flamenco styles of the same name, with themes of a very Andalusian character, and with a writing that is sometimes virtuosic, especially because of the tempo and the register in which they must be executed.